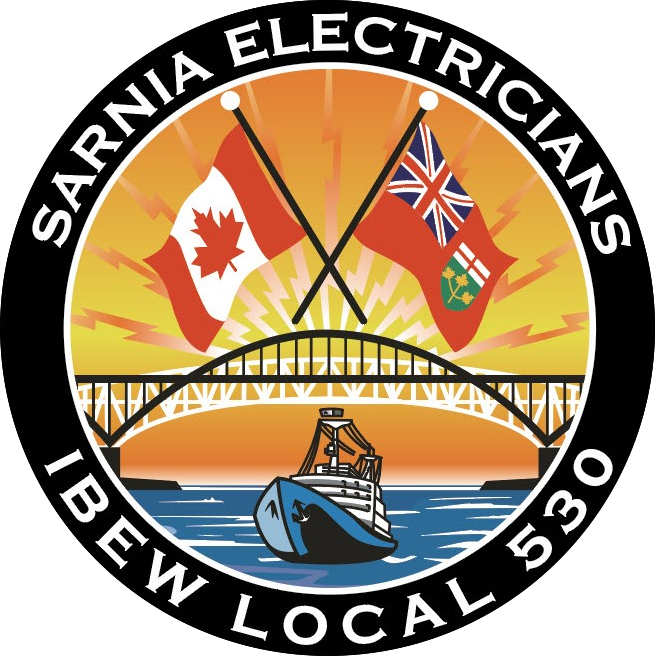 In 1899 the first Canadian IBEW Local was formed in Ottawa. Since that time the IBEW has grown to 88 different locals and to over 63,000 members in Canada alone.

On September 3rd 1941 Local 530 was formed when we were given our charter by the International Brotherhood of Electrical Workers. This charter was for the jurisdiction of Sarnia and the surrounding area of Lambton County. Our membership consists of a highly skilled and trained workforce. Our members are trained in all facets of the electrical industry: Institutional, Commercial, Industrial, Residential, Service and Power sectors. The different skill sets of our members include but not limited to: Electricians, Instrument Electricians, Communication Electricians, Power Linemen, Electric Motor Winders and Electrician Welders.

From our original membership size of 11, we have grown to over 400 workers in the electrical field. This growth coincided with the rapid expansion of the petrochemical industry. Although the petroleum industry had been established in the Sarnia and surrounding area since 1858, it wasn’t until the establishment of the Polymer Corporation in 1942 to produce synthetic rubber during World War Two that established the Sarnia area as a major petrochemical centre. The Polymer Corporation complex once adorned the back of the ten dollar bill that was issued in 1971. Today the Sarnia area is home to the “Chemical Valley” which has 62 facilities and refineries.

Sarnia is currently the home of Canada’s largest natural gas co-generation plant, Trans Alta. As of September 2010 Sarnia was also the home of the world’s largest photovoltaic (PV) solar power generation facility. Both of these facilities, as well as all the other facilities in the “Chemical Valley” were built using IBEW members.

Theme by Anders Noren — Up ↑